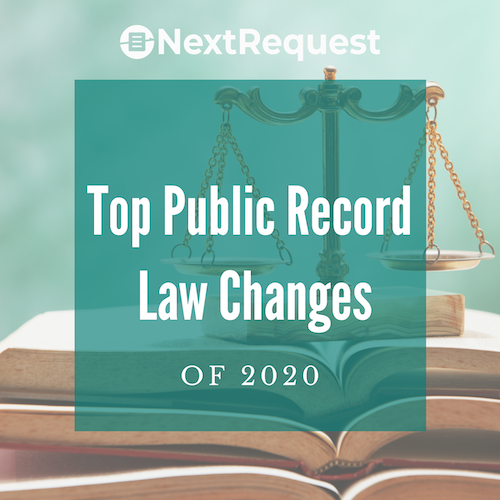 As 2020 *finally* comes to a close, NextRequest is taking some time to look back on a few highlights of the year. This year has seen several updates to public records laws that have changed the FOIA landscape. Below are our top picks on passed laws that will have the most impact on the future of public records as a whole.

Tennessee’s 2019-2020 SB2313 became effective on July 2nd as an amendment to the existing TN SB2313. It does two things: prohibits destruction of records subject to any pending public records request, and requires government entities to maintain records related to document requests for at least 12 months. With a fine of up to $500 per violation, this amendment makes watching your computer’s trash bin become that much more important. This amendment is a positive step in the direction of transparency for a state not often known for progressive policy.

How it came about: The bill’s introduction was prompted by Hamilton County Attorney Rheubin Taylor’s withholding and destruction of public records requested by the Chattanooga Times Free Press.

What was left out: Two Nashville Democrats tried to get the amendment to address concerns over legislators' access to state comptroller records on waste, fraud, and abuse, as well as public access to police body camera footage, but they were unsuccessful.

*Fun Fact: The bill was sponsored by a Republican Representative Mike Carter and passed in an unanimous 93-0 vote!*

Pennsylvania’s HB2463 amended the state’s Right-To-Know Law, guaranteeing timely access to public records during a declared time of disaster. The bill also tasked Pennsylvania’s Office of Open Records to issue guidelines within five days of a declared disaster to determine how an agency should process Right-to-Know requests when said agency’s physical location is not accessible. Basically it makes getting records in times of emergency look less like herding cats and more like a foxtrot (or at least a spicy hustle).

How it came about: After the start of the COVID-19 pandemic, state agencies stopped processing public records requests in a timely manner. This bill works against this slow-down.

NY SB8496 repealed a more than 40-year-old Civil Rights law and increased law enforcement transparency by making police disciplinary records available for public records requests. This is our favorite piece of legislation to be adopted this year, and for good reason.

Why it matters: In the wake of George Floyd’s death in May, this bill should prevent future police-related deaths and make justice more accessible to those who have been wronged by the system.

While Pennsylvania’s Clean Slate law was passed in parts, beginning in 2018, this was the first year we saw meaningful change occur as a result. As of June 19th, more than 34 million criminal cases in Pennsylvania have been removed from the public record. The Clean Slate law provides automatic expungement of public records pertaining to low-level crimes such as summary and some misdemeanor offenses.

Why it matters: This law can help people get jobs who formerly could not, and avoid the discrimination that can come from public criminal records. This is the first law of its kind and we all have a front row seat to see if it enacts positive change in our society.