Clerks, COVID, and the 2020 Elections 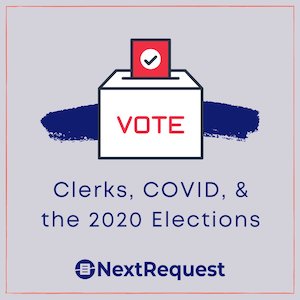 There's one government position that’s closer to public records and their management than anyone else---the municipal clerk. And these days they have a lot on their plates than just public records.

Municipal clerks can be responsible for everything from notary, transcription, and licensing to records and (most relevant to this blog post) election management.  “Elections used to be about one-tenth of our job. It’s now about one-fifth or one-fourth of our jobs,” said Barbara Van Clake, who has served as city clerk of Omro in Winnebago County Wisconsin for over 21 years.

Not only have municipal clerks had to deal with the increasing complexity of election politics (and policies) over the years, but according to PBS many clerks have had to deal with an exorbitant number of changes and reversals that have been enacted by lawmakers, election officials, and judges.

Recent election process changes have been put in place to address in-person COVID distancing guidelines. Changes include expanded voting times and dates, added voting centers, and increased ability for voters to vote early. So many changes at once have been sowing doubt with skeptical citizens who are concerned that these methods will create more avenues for voter fraud. Updates to the election process are rarely met with enthusiastic open arms, even if they’ve been happening at a faster rate in recent decades due to more modern voting technologies allowing citizens more ways they can cast their votes.

In Michigan, for example, more than 2 million absentee ballot requests have been received as of September 11th according to Jake Rollow, a spokesperson for the Michigan Department of State. "That is more than has ever been requested in any Michigan election," Rollow said, "not just at the eight-week mark, but the final number in any election." Tallying a greater number of absentee ballots means that clerks and election officials have to manage a completely different voting process outside of the standard day-of voting process.

Some states, like Utah and Washington, send a ballot to every registered voter before an election and because of this have many machines and processes designated to handle the high volume of mail-in voting. Unfortunately, the majority of states don’t have access to these same resources, and the stark increase in mail-in ballots and therefore workload on clerks have already led to hypothesized delays in vote tallies.

Not only are clerks having to deal with the influx of mail-in ballots caused by COVID, but they’re often responsible for tracking down voters who make mistakes on their forms. These mistakes have already been attributed to a high number of presidential election mail-in ballots that have been rejected this year in a troubling fashion.

We’ve only just scratched the surface on what municipal clerks are directly responsible for in an election. COVID’s quarantine mandates have created a completely new landscape in which citizens will be submitting their votes. Many dedicated clerks have been addressing the voting difficulties themselves. For example, the town clerk of Colby, WI, Theoline Ludwig, has driven to homes of elderly voters to show them how to upload their photo ID to the state’s voter registration website. Over in Sheboygan, WI, first-time clerk Peggy Fischer dropped off ballots on the porches of residents who were quarantined, waited while they filled the ballots out, and then signed as their witness.

The above ad-hoc procedures certainly aren’t scalable, but they do highlight the great disparities in how we as a country are collecting votes. Going door to door isn’t ideal, but it’s how some clerks find that they can get to those who would otherwise be missed. It also shows the sheer determination and dedication that municipal clerks embody.

So if you’re a municipal clerk (or maybe you know one), be sure to keep your head up this election year. Not everyone knows the added strain being put on one of the country’s columns of transparency, but at NextRequest your effort is valued and applauded. As always, visit www.nextrequest.com for more on everything public records.