What is a Vexatious Requester? 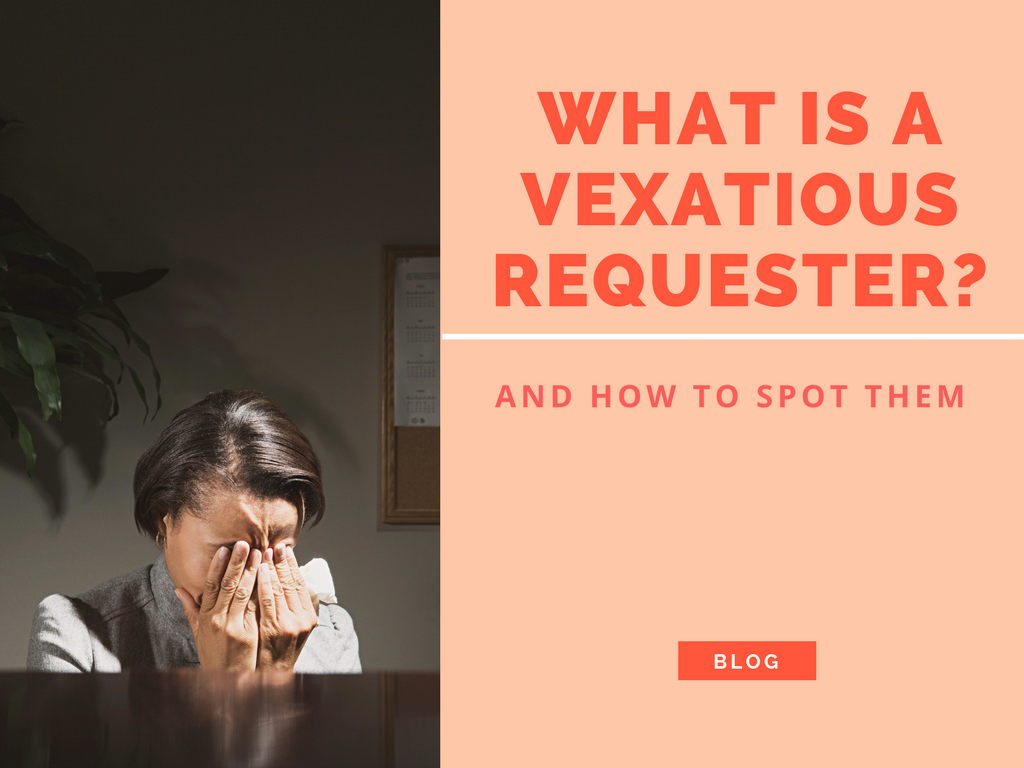 Vexatious is quite the fancy word. Say it out loud. Vexatious. Feel how guttural and almost provocative it is? Someone who is vexatious is a doing just that—provoking. Ever been repeatedly called by a persistent telemarketer? That would be considered vexatious. Kids can be vexatious too, especially when they ask questions over and over again or refuse to listen to you even after the 10th explanation.

In recent years the term “vexatious requester” has become the go-to label in the U.S. for a citizen who repeatedly attempts to get information from their government through frequent or voluminous requests. It's no secret that government agencies throughout the U.S. struggle to respond to requests in a timely manner. An onslaught of vexatious requests can take valuable resources away from requests that are in keeping with the intent of the law.

Vexatious requesters can be found all over the world, particularly in countries with open records laws. While Britain was first to enact a Vexatious Actions Act in the 1800’s, they didn’t have any vexatious requestor guidelines until after they enacted their FOI Act in 2005, championed by Tony Blair. Well, not so much anymore. In the beginning, Mr. Blair had been a vocal advocate of the Act, but after some reflection he ended up adding 4 years to the scheduled implementation date because of what he called a lack of foresight. In his memoir, A Journey: My Political Life, Blair wrote: “I realised we had crossed a series of what should have been red lines, and strayed far beyond what it was sensible to disclose.” Other countries with vexatious litigation laws are Canada, New Zealand, Australia, and Ireland.

In the U.S., some states have taken steps to mitigate these repeat requesters by either proposing or enacting “vexatious requester” laws in an effort to curb their request frequency. Once a requester has been flagged for requesting information too often or has asked too many questions, a local government can legally ignore their request.

The first state to enact a vexatious requester law was Hawaii in 2010. The law stemmed from the extraordinary number of requests the state was receiving for President Barack Obama’s birth certificate. Agencies throughout the state, from the Department of Human Services to the Office of Information Practices, received repeated demands from people outside of Hawaii seeking copies of President Barack Obama’s birth certificate. The law has allowed Hawaiian government agencies to legally ignore public information requests from anyone they believe has requested information too often or asked too many questions.

Individuals, journalists, and organizations fighting for open records laws assert that vexatious laws can be perilous to government transparency. They argue that vexatious requester bills are too broad and that they create a dangerous precedent that can put a damper on those looking to exercise their constitutional right to information from the government. They also assert that the vexatious requester bills lack definitions and that they give government agencies license to interpret legislative intent without guidelines.

Is there a happy medium between protecting the time and efficiency of a government agency and the need for those agencies to provide information to the public? With vexatious requests there needs to be a delicate balance of the “hows”.

Correctly identifying a vexatious request can be difficult. Agencies should consider the following questions before labeling a request vexatious.

There are a lot of commonalities to vexatious requests. Here are a few reasons agencies have used to refuse a request:

Some laws stipulate that if an agency isn’t tracking the time it takes to manage every single request they receive then they do not have the authority to label a repeat requester as “vexatious”. For example, in Texas the time-tracking of all agency requests (not just those by the repeat offender) is mandatory.

If you are in a government organization seeing an increase in vexatious requesters, there are tools available to help you manage those requests and in some cases refuse them. Hint: it’s us. Our software helps agencies across the U.S. document track, and mitigate vexatious requests, saving time and resources. The best part is, we offer a free trial. Contact us today for a free assessment and a demo of our easy-to-use software.