What is a Public Record? 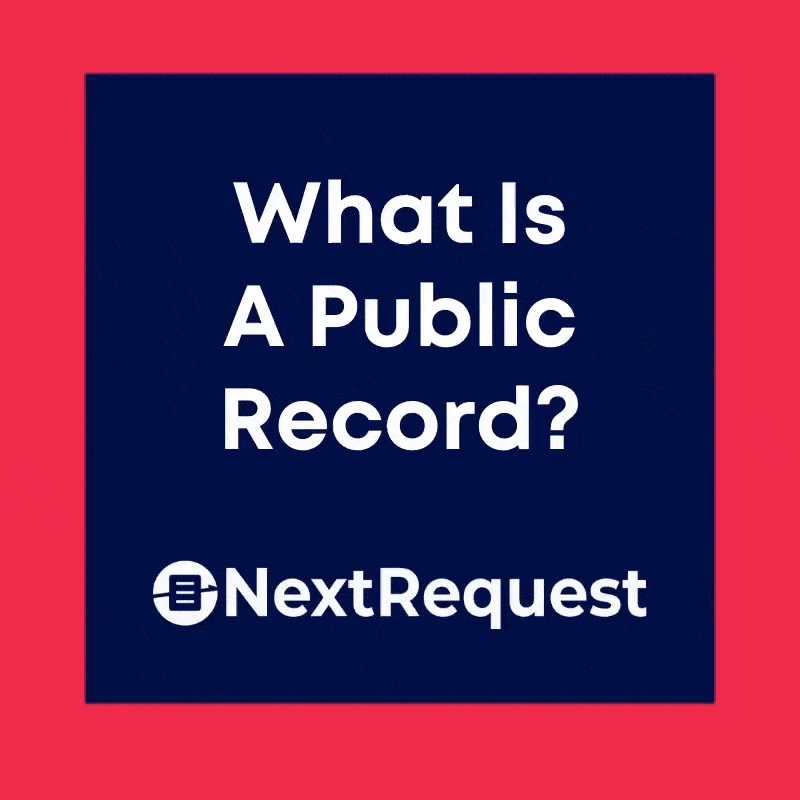 This upcoming 4th of July marks the 54th anniversary of the signing of the Freedom of Information Act. If you’re reading this, chances are you already know what a public record is.

Whether you consider yourself a public records veteran or someone who wouldn’t even be able to put together a simple definition of them, there’s something in this post for anyone interested in learning about one of the cornerstones of government transparency.

So let’s begin with the question - What is a public record?‍

A public record refers to information that has been recorded and/or filed by a public agency. They are the product of the Freedom of Information Act (or FOIA) that was passed in the United States in 1966 with the intention of providing transparency to the American people regarding anything touched by a government worker or tax dollar at any level of government.

What is Included in Public Records?

See our comprehensive list of state laws and abbreviations here.

Are Public Records Laws the Same in Each State?‍

No. Every single U.S. state manages public records differently, each with specific policies and regulations that govern the availability of information contained in public records. A public record is also referred to differently in each state. For example, public records requests can go by Sunshine requests in states like Florida, Louisiana, and Missouri, open records requests in states like North Dakota, Ohio, Oklahoma, and Wisconsin, or names unique to one specific state like CPRA’s in California, CORA’s in Colorado, OPRA’s in New Jersey, PIA’s in Maryland, MGDPA’s in Minnesota, OPRL’s in Oregon, TPRA’s in Tennessee, TPIA’s in Texas, and GRAMA’s in Utah. These names are often directly connected to that state’s specific public records law, like the California Public Records Act or the Texas Public Information Act.

There’s a slew of helpful resources on state-specific resources for public records, like this one from the League of California Cities.

The added complexity of public records varying state by state is that each state also has specific exemptions that apply only to their public record law. For example, in Connecticut, “park employees [are] exempt due to not being a public agency by the law[’]s definitions."

How Do You Find Public Records?

This is where some real detective work comes in. Public records exist in all shapes and sizes. Knowing how to narrow down a public records search so that you’re not sifting through unnecessary data, or heck, even paying for it, is a learned skill.

Navigating through the intricacies of a public records requests is a developed skill set, but there are a ton of resources out there to help folks get started. We found that the Harvard Law School Library has an excellent guide to finding public records.

Governments that have an open records portal or who use public records software tend to have a more transparent process on how to access information. One of our most transparent customers, the City of Albuquerque, publishes over 80% of the records requests that they receive. Published requests means that information only has to be requested once, saving the City time and getting information to the requester faster.

How Much Do Public Records Cost?

Public records aren’t always free, charging a fee for producing a public record is common practice and varies across the country. Some states have a state-wide fee schedule that governments must adhere to. Others, like Alabama, don’t have a fee schedule for providing access to public records, leaving it up to the agency to “fix a reasonable fee to be charged" unless the fee is set by statute or rule. In recent years reasonable fees have been disputed as more states have sought to further define the term “reasonable.”

What Would Never Be Considered a Public Record?

Public records exemptions vary state by state, making them tricky to navigate. Exemptions can fall into two groups. “Categorical exemptions” are when a particular type of information or record is exempt and “conditional exemptions” refer to exempting a record depends on the effect on a privacy right or government interest it might have. Examples of statutes incorporated into the public record law use a variety of terms such as “confidential,” “privileged,” “not discoverable or admissible,” or “shall not be disclosed,” to create exemptions.

Some records are difficult, and most times impossible to access, such as:

Just because something is delivered as a public record does not mean that it’ll always be a public record. In 2016 a California Supreme Court ruled that if a public agency inadvertently releases a document that should have been exempt, it can demand that the recipient give the document back, or else destroy it.‍

Where Does One Begin in Making a Public Records Request?‍

First, think about the information you really want and need. Making a request as specific as possible helps the government agency understand exactly what you’re looking for. The open records organization MuckRock has examples of public records requests for every state so you don’t have to start from scratch.

If you’re making a request to a city, county, university, or other municipality that employs NextRequest however, you’ll surely find the easy to access and use web portal to be the best public records request software option on the market.

Find out more at https://www.nextrequest.com‍