U.S. Government Transparency During A Time Of Pandemic 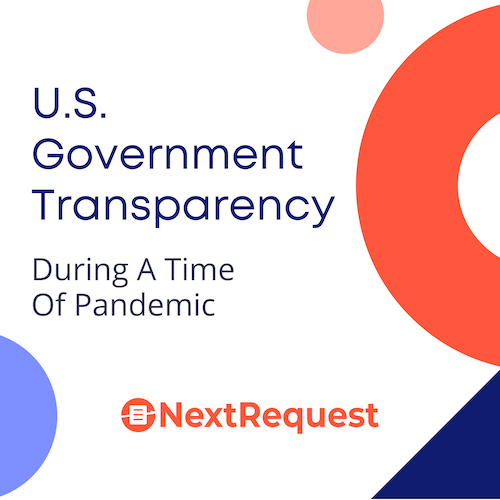 Let’s be honest, no one was truly prepared for a global pandemic. Sure, organizations had disaster plans and emergency preparedness strategies in place, but in many ways they were incomplete. The government was no exception. COVID-19’s forced closure of city halls and state departments led to employees working remotely, which caused significant disruptions to government functions as many require on-site presence.

Meanwhile, COVID-19 has also created an incredible demand for accessible and accurate health and safety information from governments. To make sure that the public and policy makers remain informed, many states have drafted legislation to release data related to the coronavirus, much of which is focused on how money is being spent or sent by the government to combat it.

Many states have struggled to keep up with “business as usual”, especially responding to public records requests. Some states went as far as to enact emergency legislation to make sure that public records continued to be fulfilled. Pennsylvania House Bill 2463 was written to prevent agencies from refusing to process public records requests even during states of emergency. It was passed into law on July 26, 2020. Initially drafted by Republican Seth Grove and opposed by Democratic Governor Tom Wolf, Wolf eventually came around to it after realizing that it could still be possible for the employees tasked with fulfilling records requests to remain safe while doing so.

The changes the new bill brings are:

Another bill targeting public records during the time of COVID-19 is New Jersey’s Senate Bill 2751. It has yet to be passed into law, but the bill has a lot in common with Pennsylvania’s in that it requires agencies to still fulfill records requests regardless of states of emergency; “It is in uncertain times when transparency is most important” Democratic New Jersey Senate Majority Leader Loretta Weinberg said.

Meanwhile, Virginia Congressman Don Beyer has started to target a different kind of government transparency regarding data. Beyer introduced the “COVID-19 Data Transparency Act” on July 20, 2020 in an attempt to codify standards for health departments to report statistical information to the CDC and require said information be made public.

The specific data the bill would require to be sent along to the CDC includes:

Even the best-laid plans can be inadequate in an emergency situation. Especially one that spans the entire globe. Governments big and small have been strained by the added responsibilities that COVID-19 has caused. The increased need for transparency has been difficult to maintain, but thankfully governments have been quick to adapt.