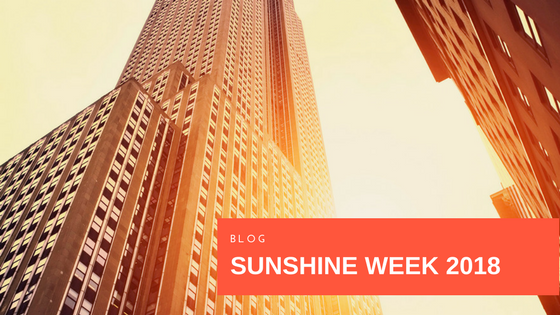 Every year, one full week of March is dedicated to continuing the conversation on how and why open government is vital to our democracy. Sunshine Week starts on Monday March 12th.

After yet another tumultuous year of U.S. politics and threats to basic civil liberties, keeping the conversation on why governments should be open is more important than ever. This is what compelled us to find ways to honor Sunshine Week 2018.

What is Sunshine Week?

Established in 2005 by the American Association of News Editors, Sunshine Week was created as a national initiative to educate the public on open government. It was born in direct response to a series of new exemptions to Florida’s state public records laws that were making the availability of government information more obscure.

Originally planned as a single day, it was immediately decided that the conversation and the education needed to span more than just one day---and with that Sunshine Week was born.

During the week hundreds of media organizations, nonprofits, schools, civic group, and other participants around the country engage in public discourse on why open government is so important. Discussion take the form of events, columns, websites, editorials, seminars, forums, and blogs and all are geared towards the continued conversation around how we need to keep the line of communication open between the public and our governments.

Why do we as a company feel it’s so important?

Because transparency is good for government. Holding governments accountable to providing the rationale behind decision-making is the cornerstone to any democracy.

So what gives? How come there’s still inefficiencies and push-back?  Well for one, many government agencies feel like it’s an overwhelming task to make changes to be more transparent. This problem is then compounded by the fact that many states can still get around public records laws through claiming “legislative immunity”. The result is a murky landscape of what exactly is available for public eyes.

Agencies who get in front of transparency with measures such as easy-access to public records or heck, even posting updated and relevant information onto an agency’s website, are already one-step ahead of the curve.

This is why Sunshine Week is so important. The name says it all really, the organization celebrates and illuminates a topic we can get too complacent on---open government. Without a watchful eye, and without organizations like MuckRock and The Sunlight Foundation who dedicate themselves to maintaining the free flow of information from our governments to its citizens, we’re at risk of an uninformed population with a government that isn’t held accountable.

How are we celebrating?

How can you celebrate?

Although Sunshine Week is only 7 days, we can all do our small part in keeping the conversation going all year long.