Spotlight on the Sunlight Foundation 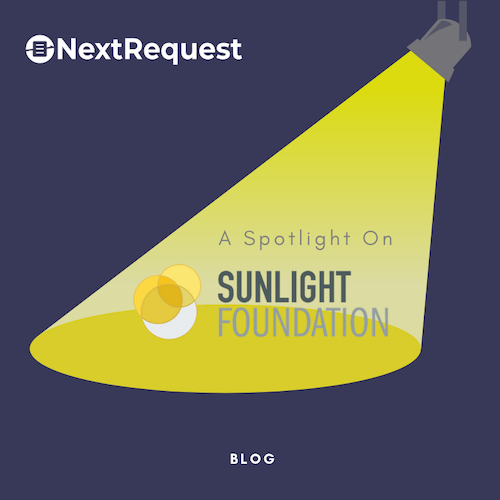 Last October, the Sunlight Foundation published a research white paper titled “Open Data Policy and Freedom of Information Law: Understanding the relationship between the twin pillars of access to information”. As the first multi-city study of the relationship between open data and FOI, their findings around open data policies and the information that citizens seek was eye-opening.

One of our core company mantras is to encourage both present and future agency customers to open up data to the public, so we reached out to the foundation to discuss their wealth of findings further. We had the pleasure of connecting with two experts on open data policies, Alena Stern a former Sunlight Foundation fellow and Becca Warner, the Sunlight Foundation’s Open Cities Communications Officer, to dive deeper into how they found inspiration in researching the topic.

But first— a little background on the The Sunlight Foundation.

The Sunlight Foundation serves as a national, nonpartisan, nonprofit organization that uses civic technologies, open data, policy analysis, and journalism to make our government and politics more accountable and transparent to all. The division of the Sunlight Foundation devoted to expanding open data policies nationwide is called the Open Cities Team and is generously supported by Bloomberg Philanthropies. The Open Cities Team provides direct technical assistance to dozens of mid-sized American cities participating in the What Works Cities Initiative, which helps develop and track open data policies and improve local government’s capacity to effectively engage communities with open data through Tactical Data Engagement.

There’s no question that the sheer quantity of public data collected by government agencies continues to grow and will continue to grow indefinitely. Many cities are still grappling with ways to efficiently collect, store, and distribute that data to the public. In an effort to solve this problem, cities throughout the U.S. have started to pass open data policies and implement comprehensive open data programs.

As the Communications Officer for the Open Data Team’s public writing and social outreach, Becca contributes directly to work with city halls and communities. She listed some of the many challenges that an agency must overcome before even instituting an open data policy in the first place.

Passing an agency-wide open data policy is just the first step. The next step is, “what data do we release?” The sheer volume of data-set options an agency stores that could be made public is vast. An open data policy isn’t effective if the data being made pubic isn’t frequently requested. While open data sets have been shown to decrease overall public record requests, not having the most requested data made public means that government resources are still being taxed for data that the public truly wants.

The Sunlight Foundation’s white paper digs into the next step of the process for cities that have already done the hard work of implementing open data programs. The white paper serves to get a better understanding of the relationship between public records requests and open data portals to determine how residents are making use of public information and how agencies can more efficiently release data to the public. Read a great breakdown of the findings here: https://sunlightfoundation.com/2018/10/09/research-cities-save-time-on-records-requests-by-doing-open-data-right/

The primary analyst on the project, Alena Stern, was a fellow at the Sunlight Foundation on the Open Cities Team during the Summer of 2018. Her primarily focus was on the collection and technical analysis of the data for the whitepaper.
‍

“Our hope was that this research would help city staff understand exactly when and why residents are still struggling to engage with public information and apply resources to improve the way open data and FOI laws work together.”,  Alena Stern

We presented Alena and Becca with a fictional magic data wand and asked what they'd wish for in regards to open data policies and agencies.

Alena wished that all agencies would take an “open by default” mentality to data. By releasing all information as open data (unless there is a legitimate privacy or security reason not to do so), it lessens the bureaucratic constraints of responding to FOIA requests that affect most agencies. She’s hopeful that cities can use their public record requests as a roadmap to help them effectively prioritize the release of highly-demanded datasets to the public.

Alena had a second wish—that agencies invest in making data accessible to citizens with more diverse interests and experiences. She said it’s one of the reasons she’s so excited about the Tactical Data Engagement work that the Sunlight Foundation is doing to connect information with communities.

Becca’s wish was to increase data personnel capacity. She believes that governments want to improve their processes and engage with residents - but they tend to be overworked and understaffed. Keeping data-literate, interested people in government positions to guide the programs would be the best possible outcome both for governments and the communities they serve.

There’s a lot more work to be done and making data available to citizens, and organizations like the Sunlight Foundation are vital to the continued promotion, education, and overall evangelism of open data policies in our nation.