A Spotlight on Police Records Reform 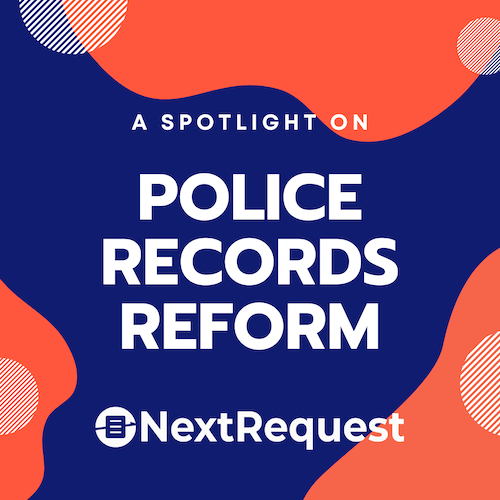 The conversation surrounding the relationship between the police and the public has never been louder. Calls for defunding, reform, and even total abolition of law enforcement have been rampant. Petitions, protests, and social media postings have demonstrated the growing public interest in increasing police officer accountability and transparency. To address these concerns, states have been working to pass legislation to enact change like never before.

The question is, what changes can be made to balance the relationship? One of the most immediate ways that a state can enact change is to reform police record laws to allow more visibility into the ongoings of police departments. Access to police information such as suspension of certifications, the dates and nature of any separation, and reasons for separation could have a huge impact on the public trust.

In this post we break down various types of police records, their general availability as public information, and the various bills by state that have been passed or proposed to increase access to police records.

Some of the main types of documents that can be considered police records and their general availability are:

Arrest and incident reports tend to be difficult to obtain because while the police will investigate crimes and arrest people, they do not charge people with crimes. Charges are filed by prosecutors and a court case is only opened when a person has been formally charged. Because of this, police records are not part of the court system and are not presumed to be open to the public like court records are. Therefore criminal records are rarely made available.

The number of states that have either recently passed police record updates or who have legislation on the table is long. Many of the laws passed in the last calendar year have been focused on increasing the availability of specific types of records and content. Many of these bill updates have centered on dashboard cams, body cams, and surveillance footage. For example, last fall Connecticut passed a bill to increase the speed of video and information requests from the police. This past February, the South Dakota State Legislature opened up their 2020 sessions by passing a bill that called for a series of updated regulations of law enforcement body cams.

Another flavor of police record law updates has been around personnel files. One of the nation's first police personnel law updates was the passing of California’s Senate Bill 1421 which went into effect on January 1, 2019. The legislation requires law enforcement agencies to make investigative records of officer-involved shootings and uses of force resulting in great bodily harm public on request and requires disclosure of cases of sustained sexual misconduct and dishonesty. The law was met with opposition and in some cases flat out dissent, leading to new legislation that calls for civil fines of $1,000 a day for agencies failing to release records. Find out more about this specific law change here.

Another example of police records reform is Colorado's April 12, 2019 signing of House Bill 19-1119 which made the job performance of police officers public information. The bill was passed to require that internal affairs records be made public. Find out more about this specific law change here.

Is This Just the Beginning?

Police and sheriff’s departments throughout the U.S. use our leading public records software to manage and process their records requests. Check out why LAPD, New Orleans PD, and Sacramento County Sheriff (to name a few) use our FOIA software with features like redaction, workflows, payments, time stamps, and more.

Visit your state’s link for state-specific information about police records.

Thanks to the Berkeley Advanced Media Institute at the Graduate School of Journalism, UC Berkeley for research used in this post.